Kumbh or The Pot

There is a beautiful story mentioned in our scriptures. My mom always says and is always proven right, that the moment you relate a story to an occurrence you never forget. Such is the nature of our mind.

So here is the story in brief. The Gods (Devas) and the Demons (Asuraas) were in a constant fight with each other for the nectar of immortality. The trinity (Brahma, the creator, Vishnu, the preserver and Shiva, the destroyer), intervened and they came to an amicable conclusion and advised the devas and the asuraas to churn the ocean together. The treasures were immense and distributed equally. Finally, Amrit, the nectar of immortality emerged. This was crucial for the Devas to consume and not share the same with the asuraas. In this conflict, Devas eloped with the pot and some drops of nectar were scattered on the earth at four places. These are Haridwar, Prayagraj, Trimbak, Ujjain. Thus, the significance of these places for this gathering to move towards salvation from the cycle of birth and death, The Ultimate Liberation.

As per Vedic sciences, geography and geometry of the celestial bodies play a role on the human body. Especially during certain planetary equations. Kumbh is the time, when the planets are in a position that facilitates the human body with an upsurge of the energy naturally and rapidly.

Our scriptures, therefore have stories and events making it interesting and also crucial for every human being to be here during this time. Whether we seek liberation or no. It seems moving towards salvation is a continuous process in ones’ lifetime, in awareness or unawareness.

We all are seekers aren’t we? Whether we urge for materialistic possessions or to be in a relationship. We are constantly seeking. Maybe what we seek today, we won’t tomorrow. But we will seek something or the other. This is human nature, isn’t it?

Ancient scholars – astronomers, physicists, mathematicians who were mostly sages, figured places on earth which were 0 to 33 degree latitude. As the planet is spinning, it creates a centrifugal force that works vertically in the human system creating an upsurge of energy. These four places Haridwar, Prayagraj, Trimbak (near Nasik) and Ujjain were marked by the sages for a supportive influence on people. They are either on the river banks or on the confluence of the rivers. Hence proven that science was the basis of the ancient Vedic texts.

In Indian culture, mukti or liberation has been the ultimate goal predominantly for the followers of Vedas. No wonder we very frequently heard the word ‘Mukti’ from our elders. To be here during this time is hence, very important in ones’ lifetime as this is nature’s assistance to help us move towards liberation. Or in other words, move out of the comfort zone. Shed the limitations of the body and the mind. Just accept things the way they are. Live in the moment.

At each place, the festival happens once in every twelve years. Hence, after three years, at one of the four places.  However, the dates of the occurrence may fluctuate depending on the planetary positions. 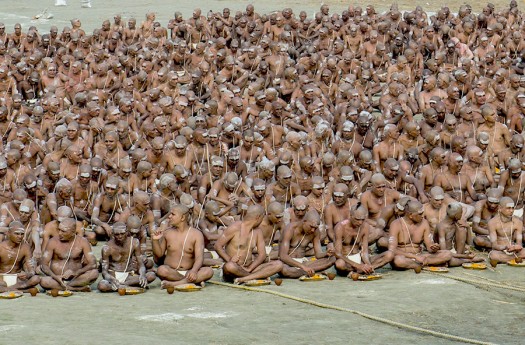 In my country mentoring plays a major role. Most of the people are devoted to their spiritual masters or gurus and follow their instructions. And those who don’t have a guru, they follow what their parents followed or advised. And a few intellectuals, who catechize the importance and significance.

They all, ultimately, congregate under the stars near the confluence of the rivers, for just one goal with utmost dedication.  To be part of this celestial occurrence. Making this, probably, the highest gathering of humanity, peacefully and intensely, who wish to move towards salvation or a few who merely seek the experience of being in this space. Or a few, who are confused as well, like me.

Kumbh, this year is at Prayagraj, formally called Allahabad and before that it was called Prayag. A city that is second oldest and plays a significant role in Indian scriptures. Mere 3 hours drive from Varanasi. The time you arrive, you enter a sea of humanity probably the largest in the world. Locals, pilgrims from all over the country, many from overseas, variety of ash smeared sadhus, aghoris, naga sadhus, pandits, scholars… this list is endless… and is simply fascinating to see and probably be seen as well. 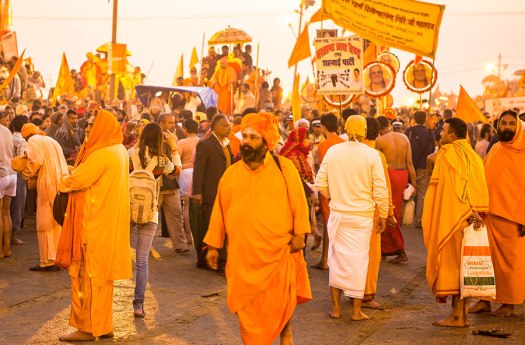 Kalidas, the prominent playwright describes the confluence of the white waters of Ganga and blue waters of Yamuna as a string of pearls and sapphires and also compares it to the garland of white and blue lotuses intertwined. The river looks divine and the dip here is truly breaking all your limitations, of the body and going against the ever flickering mind. Truly the time, the atmosphere and the fervor made it easy for me.

More than me writing, the photos do more justice to my expression about the Kumbh. The photos are graciously shared by my friends.

The arrangements by the Uttar Pradesh government and the tourism body has done some exemplary work in smoothening the wave of the pilgrims. Very organized keeping in the mind the important dates:

Community tents, regular tents, private tents,  Swiss tents and the most luxurious TUTC Sangam Nivas Camp has attracted a lot of people to travel to Prayagraj.

Extra flights to Prayagraj from various cities and additional special trains are facilitated for the pilgrims.

For me, who has a phobia of large crowds even though having lived in a city like Mumbai, this was an experience of a lifetime. I don’t know how and why I chose to visit. But I decided in an impulse, maybe to challenge my comfort zone. It was overwhelming but deeply satisfying. Honestly, words cannot justify this experience.

If you haven’t yet planned your visit, please do. Get out of the comfort zone and soak yourself in the wave of humanity. Once you are there, you may stop looking for takeaways and that maybe your biggest takeaway!

10 Replies to “A Quest for Liberation – Maha Kumbh”

This site uses Akismet to reduce spam. Learn how your comment data is processed.